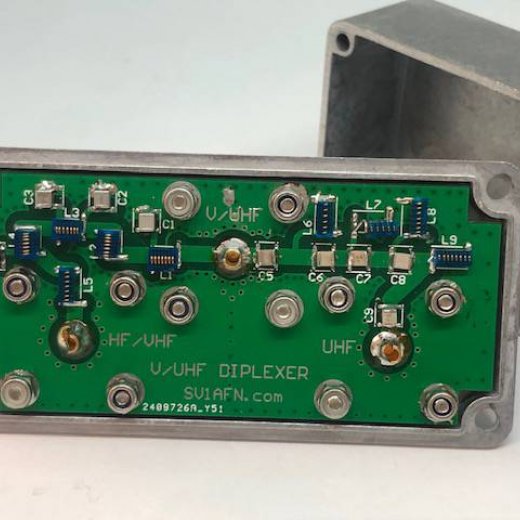 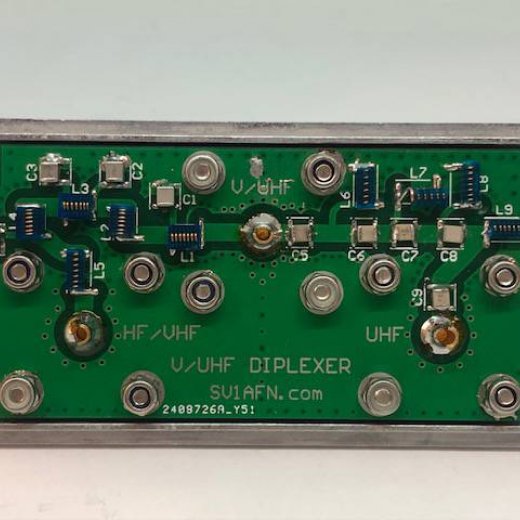 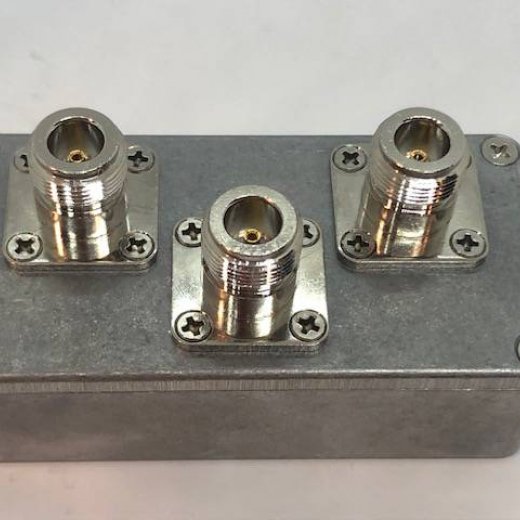 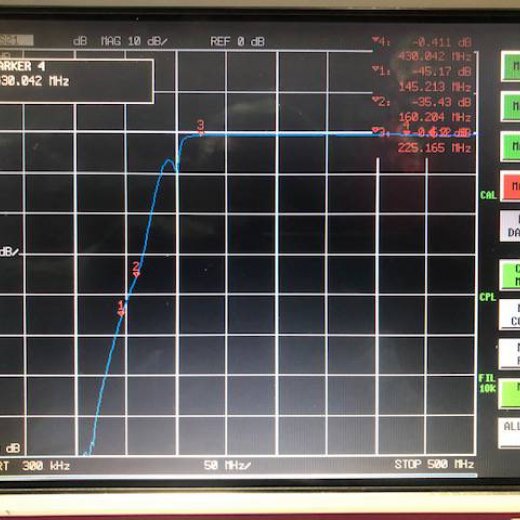 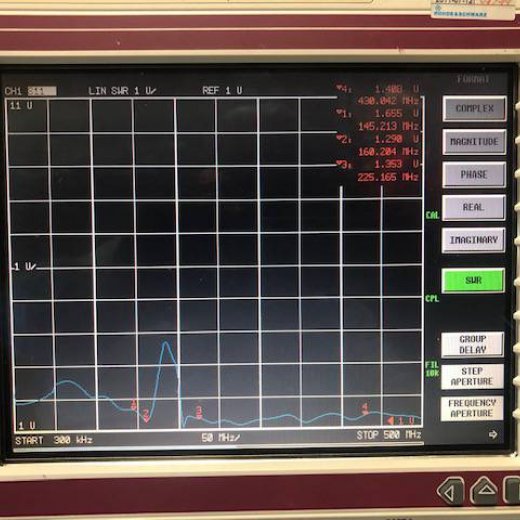 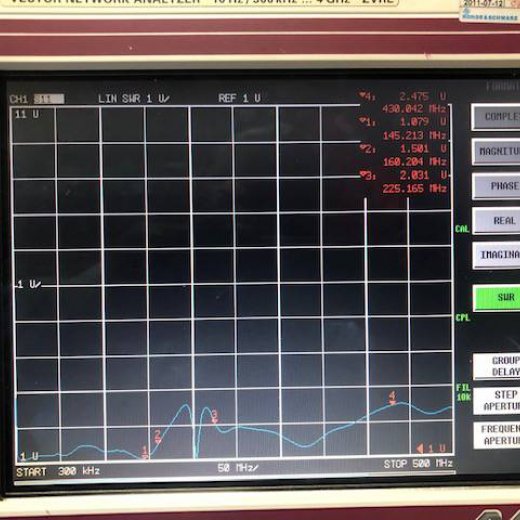 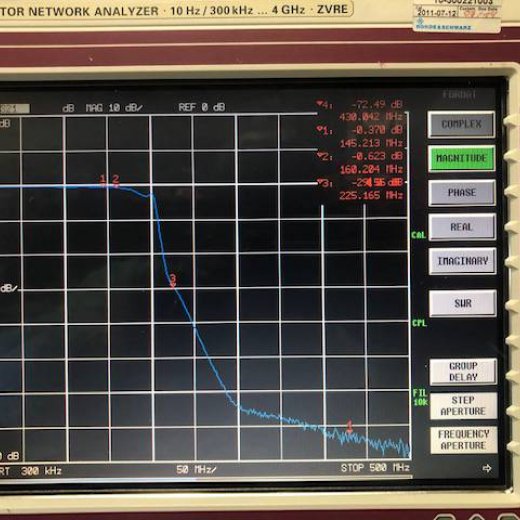 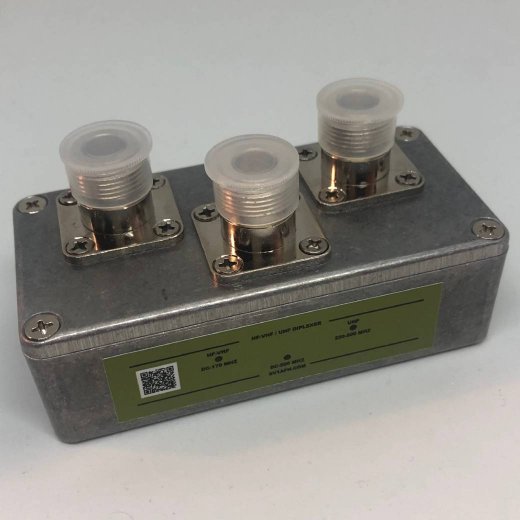 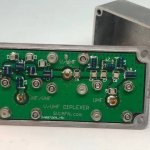 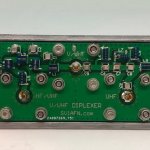 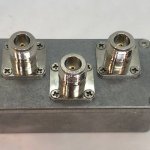 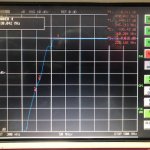 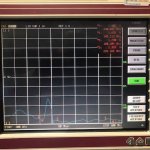 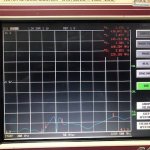 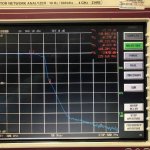 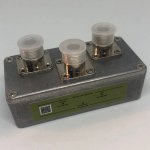 If it happens you own a dual V/UHF antenna and you need to connect two different radio transceivers and work them simultaneously transmitting or receiving, or both, or a dual-band transceiver and you need to connect  two different VHF and UHF antennae and again to operate on both bands simultaneously, then you need a diplexer similar to this one. Usually a diplexer is placed to economize from the need of a second expensive RF transmission line cable  The Diplexer described here has 2 ports and is made using one low-pass and one high-pass filter. One port (called VHF)  works at 0-170 MHZ and the second port (called UHF) works from 225 to >450 MHZ. It has been designed using the Legendre coefficients with 50 Ohms termination resistance for the VHF and UHF ports and infinity Ohms for the common point. The so-called "VHF" port provides minimum attenuation from the common point while maximum attenuation from the "UHF" port. Similarly, the "UHF" port has minimum attenuation from the common point, while preserving maximum attenuation from the "VHF" port. This is done using a low-pass filter and a high-pass filter, with their inputs connected together at the common input or output point. For easier physical implementation, their first element needs to be opposite that the other's, i.e., if the low-pass filter starts with a coil, the high pass filter should start with a capacitor. Reading text from the Anatol Zverev's "Handbook Of Filter Synthesis"  and from the G. Matthaei's "Bible", "Microwave Filters, Impedance-Matching Networks, and Coupling Structures", I realized that their impedance at the common point should not be calculated as being 50 Ohms,  nor any higher value, but infinite. I have done a similar design for the diplexer used in my HF to VHF  Up-converter project, described elsewhere in this website. For maximum attenuation of the rejection frequency band, while keeping losses at minimum for the wanted frequency band, I have chosen to use a 9-pole design. ​After many hours spent on calculations and simulation, I came up with the design shown here. I have tried to use ready made components to facilitate repeat-ability without tunning.  Because other similar designs published use transmission lines or parallel and series LC circuits to add to the isolation figures, I haven't used similar techniques, just two simple filters to see if fabricating them using readily available components can produce a decent result. Coilcraft and others today makes nice inductors with self-resonant frequencies well above the target, above 2.5 GHZ and in addition they can withstand much current, in the range of 5 to 7 Amperes. Similarly, SMD RF-grade capacitors to withstand high voltages (> 1500V) are available from Vishay and others. The high voltage ratings of the capacitors used and the high current capability of the inductors used, aid to make the diplexer able to work at higher RF power levels, without damages. Fig. 2.   Frequency response plot of the VHF port, while the UHF port is terminated with a 50 Ohms load. The 3 dB point is at 180 MHZ. The insertion loss is 0.3 dB (marker 1) at the 2-m band and the desired attenuation of the UHF channel is greater than -70 dB.  One more thing: By saying VHF, it means 50 MHZ and DC-HF too. This diplexer can be used as a 6-m/UHF diplexer or even as an HF/UHF diplexer as well. The attenuation at HF and 6-m is even less than of the 2-m band. Fig. 3.   Frequency response plot of the UHF port, while the VHF port is terminated with a 50 Ohms load. The 3 dB point is at 195 MHZ. The insertion loss is 0.35 dB (marker 2) for the 70-cm band  and the desired attenuation of the VHF channel is more than 45 dB. So, the isolation between the VHF and UHF ports is greater than 115 dB. For example, if transmitting at UHF and simulatneously receiving at VHF, the unwanted UHF signal at the VHF receiver will get more than 115 dB attenuated! If transmitting at VHF and receiving at UHF, the same applies for the fundamental frequency but consider the power level of the 3rd harmonic which will pass through the UHF port, 50 dB attenuated from the low-pass branch. This is >30dB better than other simpler designs. USER COMMENTS:   Check this video from PV8DX in Brazil: It is about the earlier lower-power version link https://youtu.be/c5fLyrGaJp4 Thank you Paulo!